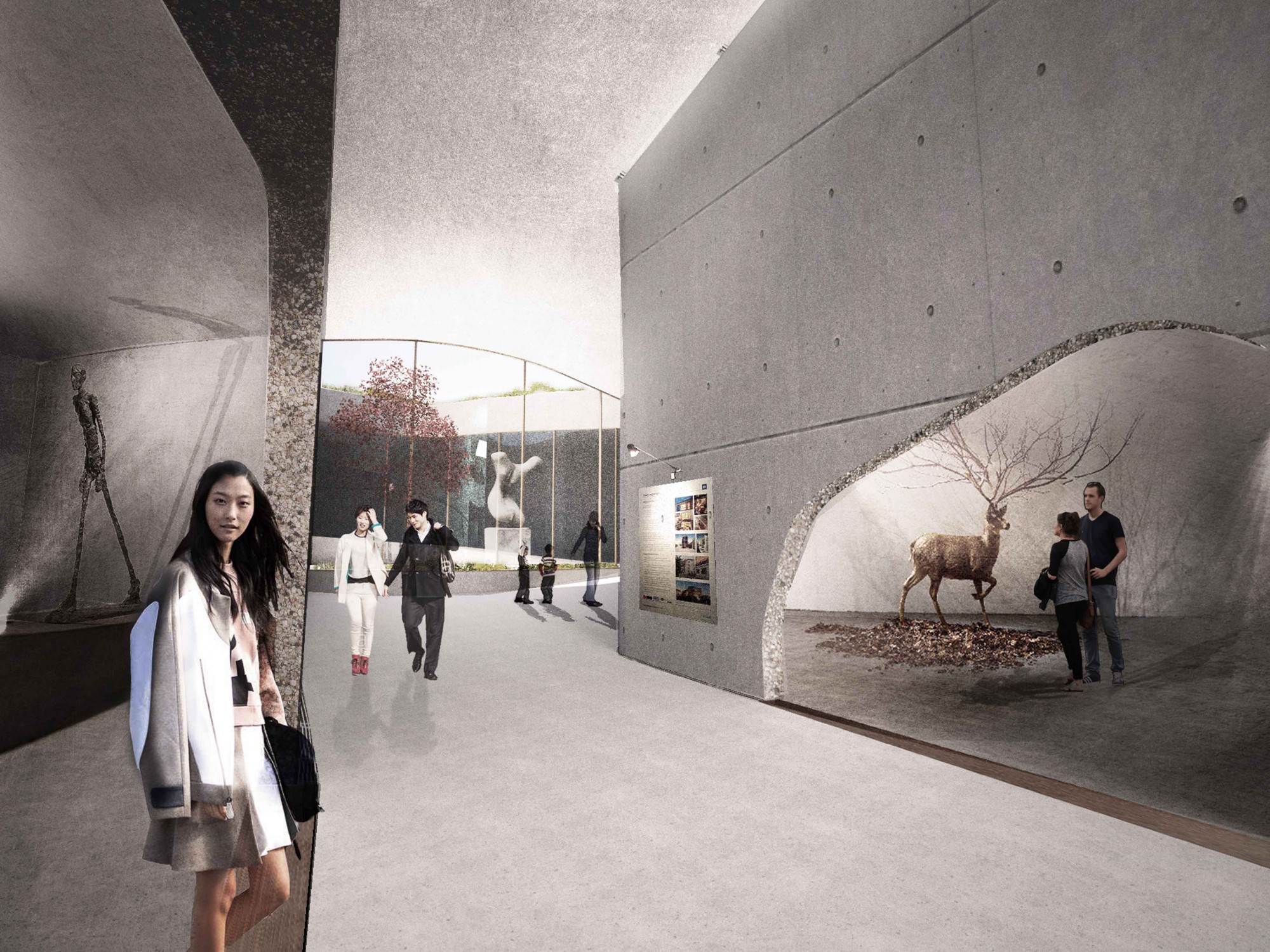 From Landscape to Landmark

Standing along the riverside and located at the limit of the old town, the site location turns it into a natural door to Suncheon’s downtown.

Yet the site in its actual configuration doesn’t seem to take the most of this situations, and its assets seem to have been neglected over time. In fact, the door is constituted of a simple bridge following with two series of façade where retails and housing are stacked.

The purpose of the project is to give back the site its image of city entrance, turning it into a landmark that will redefine Suncheon’s identity.

The main goal of the city is to enhance tourism by providing a new cultural offer but the objective is also to create a new and living public equipment that will contribute to the everyday neighbourhood’s life, by hosting events and welcoming educational facilities. 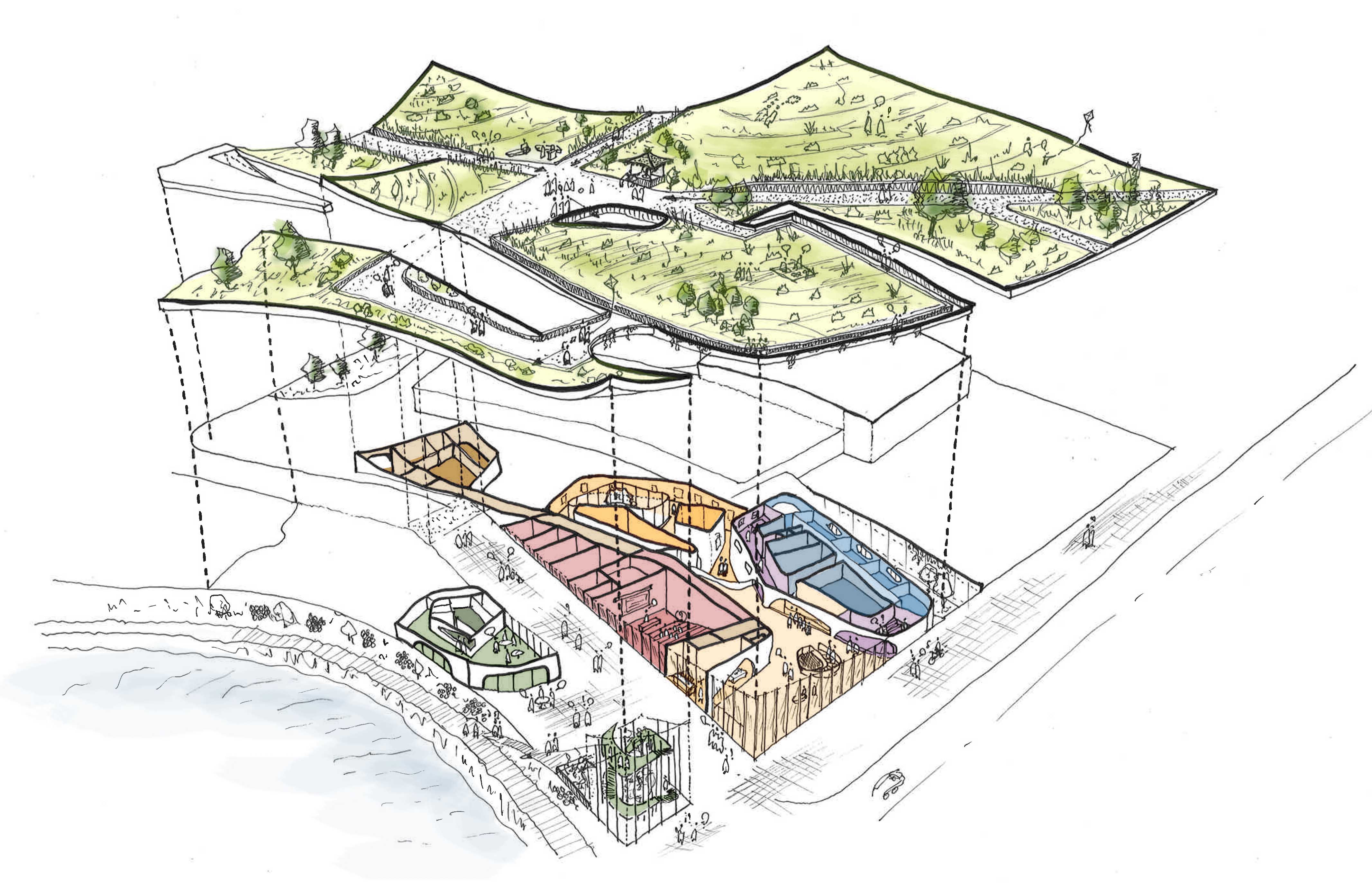 Our reading of the program leads us to summarize our main purpose in a combination of four major goals:

The three first ambitions are expressing a will to attract a lot of different communities of users.

The last one emerge to us as a strong will to unify these three targets. To reinterpret the city’s history and the whole country’s cultural heritage is a unique opportunity to enhance Suncheon’s ability on embracing its future.

These major goals are materialized programmatically on a quite small surface. This aspect, which could be seen as a drawback, appears to us as an opportunity to concentrate the programs and merge them into a single, strongly expressive and thought-provoking architectural element, the new Yeonja-Ru.

Yet the site is quite broad, and its complete occupation is not an option regarding to the surfaces restrictions. This reality leads us to ask the question the other way around: If we can’t cover it, how could we totally free the site’s surface?  How can we design a building with such strong ambitions and still offer a better lifestyle to inhabitants of the neighbourhood, by providing unbuilt spaces, green areas, boardwalks, parks, and places where one can wander and meet each other?

This intention directly led us to figure the building first as a park, keeping the site mainly unbuilt, concentrating our program in the south-east corner of the site. Starting from this intention, the whole program gently slips under the protective ground. It only emerges from time to time, to bring light in its heart, and raising the wanderer’s curiosity on its roof by revealing some of its inner activities.

We had to turn this park into a symbolic building. 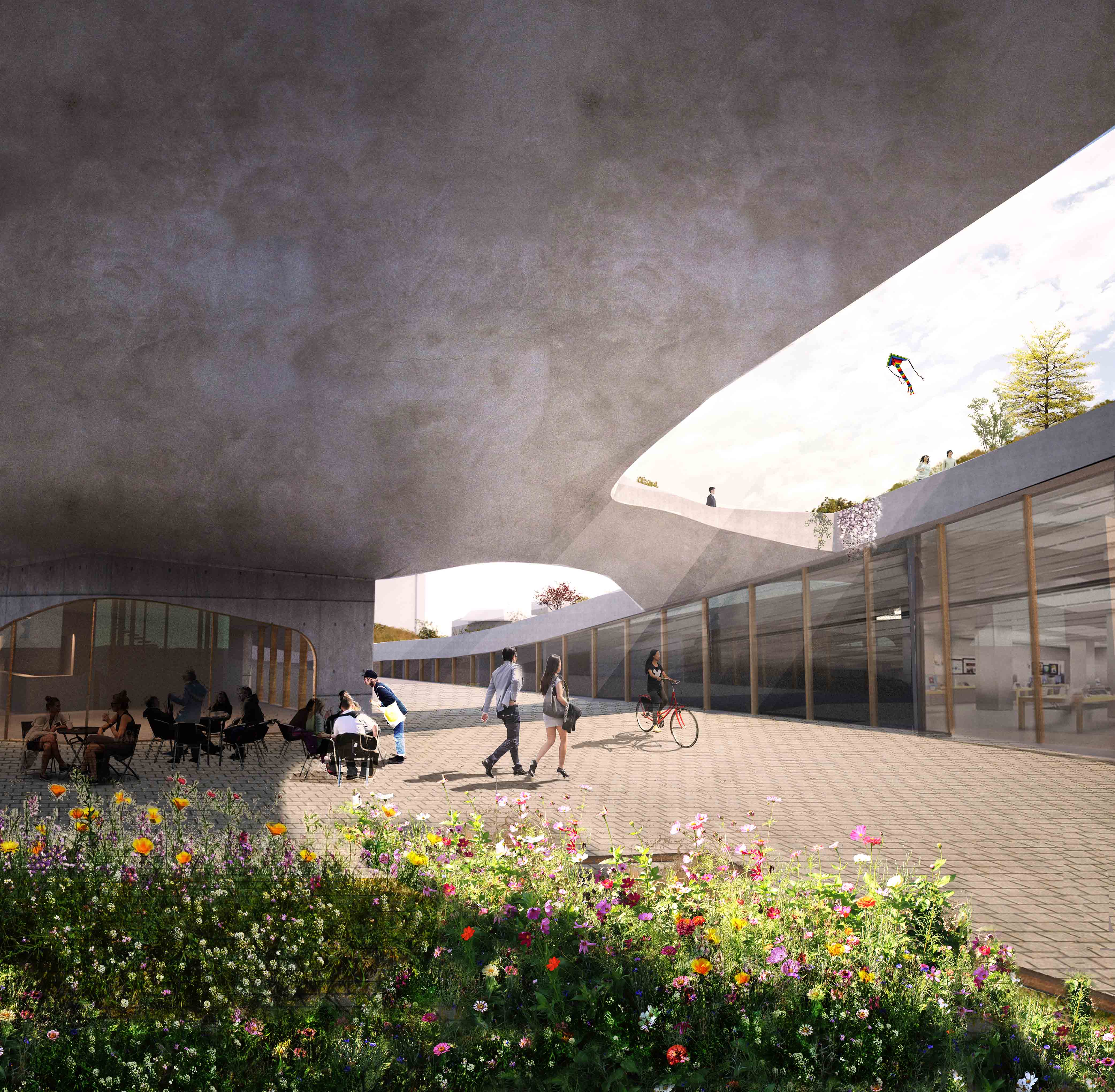 From landscape to landmark

Our next step was to shape the ground by lifting it into the air to redefine the whole city landscape. The pathway turns into an ascension leading to the park’s peak, the New Yeaonja-Ru.

This lift, attracting the public and symbolizing the building’s entrance, also offers its glazed façades to the main street, opening the reception to the visitors. After crossing the door and entering underground, the whole floor becomes a giant exposition slope, diving underneath the building’s thick earth skin and its mineral ambient, contrasting with the park above. Standing along the slope, several blocks are concealing the main building’s activities. Temporary exhibition spaces, conference room, etc… Contrasting with this surrounding made of earth, stone, concrete, the appearance of light turns into a sensorial experience, provided patios, rifts, oculus, and by the main “canyon” created with the street (site C). Walking along it is quite like crossing the actual building. The glazed façades shows its inner life: conferences, workshops, shop, restaurant, and cafeteria.

At its peak, the Yeonja-Ru offers a challenging vision. Raising in the air, the park is suspended over a light glazed box, where a monumental staircase lifts the visitor off the ground, surrounded by light and plants, forming a physical elevation where a link with nature and with elements are also allowing a spiritual elevation. At the top, a panoramic view shows the river crossing the bustling city as well as the old Yeonja-Ru reigned over the city, linking Suncheon’s ambition with its cultural identity.